Sir Isaac Newton's inventions contributed a great deal to our understanding of subjects from optics to theology.

In mathematics Newton's discoveries have unified separate techniques previously developed to solve unrelated problems like finding areas, tangents and lengths of curves that we still use today. 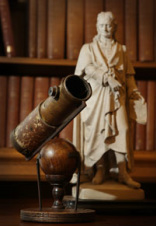 Newton's lived in a time period where there was a lack of telescopes, and models used a set of glass lenses in order to magnify an image. Through Newton's prism experiment, Newton figured out that lenses refracted different colours at different angles, which creates a fuzzy image for the viewer.

In order to improve the lenses, Newton came up with the idea to use reflecting mirrors instead of refracting lenses. A large mirror would capture the image, while a smaller mirror would bounce the image back into the viewer's eye. This idea would produce a clearer image and a smaller telescope.

However, it wasn't Newton who proposed the idea first, in fact it was a Scottish mathematician, but Newton was the one who mustered the energy to build one. Newton assembled a prototype and presented it to the Royal Society in 1670.

Newton's original design is still the basis of nearly all astronomical observations to this day.
Newton's discovery of gravity showed how universal gravitation gave an explanation of falling objects on Earth and the motions of planets, comets and other bodies in the universe.

Newton's inventions and contributions to science covered revolutionary ideas and practical inventions. His work in physics, maths and astronomy are still important today which is why his contributions made him famous.
Powered by