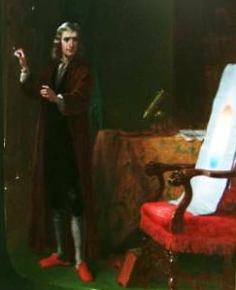 It was after Francesco Grimaldi's work on diffraction was published, Newton bought his prism in an attempt to disprove French Philosopher Rene Descartes' wave theory of light. Newton proposed that light consists of little masses.

Newton used prisms to shows that sunlight was made up of the different colours of the rainbow, hence, proving the Ancient Greek's ideas about light wrong. It had been thought that colour was created by mixing light and dark, however, Newton noted that blended print on a white page appears grey and not coloured when viewed from a distance. This led him to bending light through prisms, which led to the discovery of the existence of a mixture of distinct coloured rays in white light.

Newton's investigation into optics commenced in 1666 at his hometown Woolsthorpe, Lincolnshire due to the bubonic plague in Cambridge. He also took this time to investigate gravity, calculus and laws of motion.

Advocates of the wave theory has stated that light waves are made of white light and that the spectrum that is seen through a prism is formed because of corruption in the glass, as Newton wanted to prove that this was false, Newton passed a beam of white light through two prisms that he held at an angle  that split into a spectrum. When the light passed through into the prism, it was split into different colours, and it went back into white light when it passed through the second, proving that the spectrum was not caused by glass corrupting the light. Therefore, Newton claimed that this was a 'crucial experiment'. It was an experiment that devised two contradicting theories, where a failure of one determines the other. As the majority of the people agreed that light must be composed of either particles or waves, newton used this experiment to prove that light was made of particles by proving the failure of the wave theory.
Powered by